Having a colleague who has bought a geotagging device, and one who is thinking about doing the same, is the best way to get interested too. Asking colleagues how they geotag their imagese, is not quite a success, since they can only tell which programs to use on a W*ndows PC. Since I don’t use crap, I have to search a way to do this on a Mac. My Equipment: an HP iPaq 2490, a tomtom bluetooth GPS receiver, Visual GPSce to record my track in NMEA data and a camera from which the clock is in sync with my PDA…

In this post, I am explaining how to record the data, I assume you have your RAW NMEA data file available.

Although the NMEA gps data is a standard, not all programs support that format. GPX is the format which is used by most programs and thus recommended. Now how do you convert your raw data to GPX? There is only one program I know with which you can do this, GPS Babel. This is a command line tool and thus not really user friendly for most users but luckily there are enough GUI’s written on top of this tool. 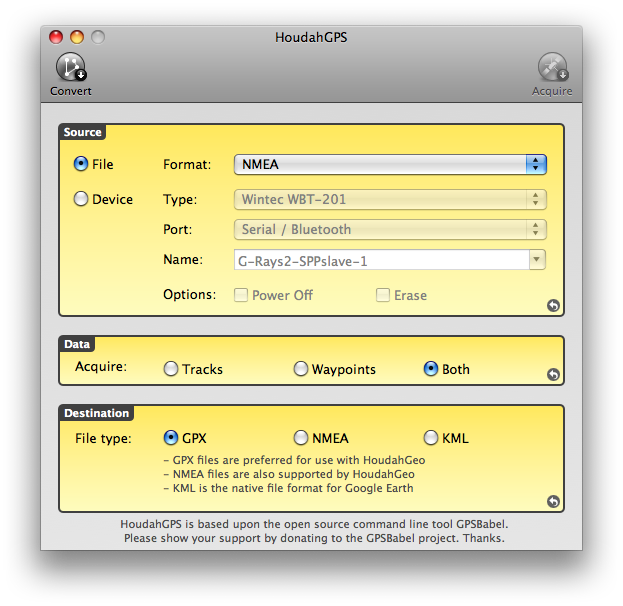 I’m using Houdah GPS because I might not be online while I geotag my photo’s and this way, I don’t have to upload my geo data to the Internet. Using Houdah GPS is quite simple:

With our gpx file ready, we now have to put the geo data in our photos. There are multiple programs available to do this.

The two last applications doesn’t seem to be maintained anymore, but they do what they have to do, so right now, I don’t pay attention to that.

In GPS Photo Linker, click the button "Load Tracks" in the left upper corner and select your GPX file. This may take some time, depending on how many data you have recorded. Next, click "Load Photos" in the upper right corner and select the photos you want to geotag. Not only JPEG is supported, but RAW images are supported as well. When all the images are loaded, go to the Batch tab in the left pane (not Standard or Manual) and click "Batch save to photos". This may take some time too, depending on how many data you have recorded an how many images you have selected.

And that’s basically it. Now your photos are geotagged and Flickr or Picasaweb pin your picture on the earth! But remember: make sure your camera and your recording device have their clocks synced, or else your images won’t be pinned correctly! With GPS Photo Linker, you can shift the time of the photos in order to have them geotagged correctly anyway.