A lot of text and links were displayed italic in Chrome on several webpages since a Windows 10 update. Firefox could display the text correctly. The problem occurred especially while on the WordPress administration pages, on the Chrome Web Store and the WhatsApp web interface.

I did notice however that all the italic text was the Google Font OpenSans font. It was included correctly in the web page but seemed corrupt in one way or the other. Then I searched for the font in my Windows Fonts directory and it seemed that the Open Sans font was installed locally as well, but only as an italic font.

It seems that Chrome uses locally installed fonts if they are available and completely ignores the included Google Fonts on the webpage. Even if a font variant is not available locally. Firefox handles this situation better by displaying the downloaded Google Font variant that is missing locally.

How to make the text appear normal in stead of italic

The solution is quite simple. Remove the locally installed OpenSans font. Make sure that you close Chrome first because it has the font in use and Windows won’t allow you to remove it 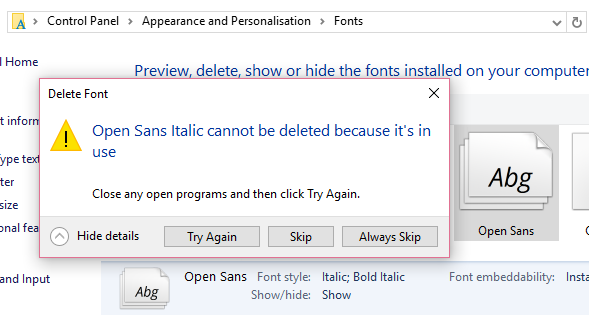 I guess downloading all the Open Sans variants and install them locally would’ve helped as well.