There was a time that ICQ was world’s most popular instant messenger. That was before a famous company decided to inject its own messenger into its operating system. Windows messenger over MSN messenger to Windows Live messenger might currently be the most popular messenger- or is it Facebook these days? – I’m hardly using it. Both Windows and Messenger. 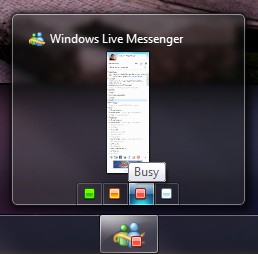 So it was until today I discovered that in Windows 7, if you hover the WLM icon, you can quickly change your status while it took me at least a minute before I found out how to change it in the application itself 🙂